Joyfully Open to the Unknown

When I think of the pleasure of embarking on an adventure, I think of that day—going to the bus station unsure whether the buses are running, and, after a two-hour wait, boarding an empty bus that passed through dusty, deserted towns. We did not know anything about where we're going, but on that particular day I felt joyfully open to the unknown.

It was already midmorning when we reached our stop, that small church in the town of Villa Nueva where we were greeted by our guide Daniel, an expat who's been living in Costa Rica for two decades. He told us to walk two kilometers down the dirt road across the street all the way where the tree line starts. That is where he'll meet us, where the real hike begins.

The heat was painfully oppressive that time of the day, but we walked eagerly, filled with the joy of the new. The dirt path, though lined by a few houses, was devoid of people except for those few on quad bikes who zoomed past us. We walked for more than an hour until we reached our meeting point. 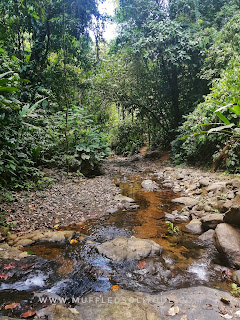 Daniel led us down a steep trail deep into the jungle. The trees stretched high above us, allowing sun rays to peek through the branches. The air, though thick with moisture, felt lush on my skin. Our footsteps are muted by the sound of the wild: the harmony of birds, the chorus of insects, the rustling of leaves, and the trickle of the nearby stream. The hike itself was gratifying enough, but when we reached those breathtaking waterfalls, I felt like we were given a surprise reward.